4th July 2022. CopyBet, the first bookmaker to enable copying of top Tipsters, can confirm today the signing of a deal to become the official betting partner of Queens Park Rangers Football Club.

The deal with the EFL Championship club will see CopyBet’s branding feature on the back of the first team’s playing shirts from the start of the 2022/23 season.

CopyBet is a sportsbook that offers competitive odds and attractive deals for both pre-match and in-play betting with more than 18,000 events daily. In addition, bettors will find exclusive enhanced prices around major football matches, including the Premier League, Championship, and the Champions League.

In addition, all new R’s fans that sign up will receive a no deposit £5 free bet to place on any QPR match throughout the season. 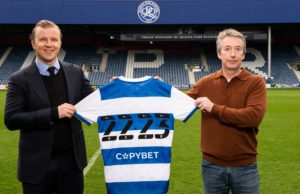 Anton Ivanov, Business Development Director, CopyBet UK, said: “We are delighted to announce our partnership with Queens Park Rangers. As passionate football supporters we are extremely happy to be involved with such a historic English club. It is set to be an exciting season for CopyBet working with QPR.”

Euan Inglis, QPR’s Commercial Director, said: “We are excited about this new partnership with CopyBet. Their model is very different to others in the marketplace with their innovative use of Tipsters. Anton and the team at CopyBet have been a pleasure to deal with as we embark on this multi-year partnership, which will include a number of creative, collaborative initiatives.”